I am not buying the argument laid out by this article that the E.U. isn’t the bureaucratic impasse that it is.  While its true that some measure of stability can be obtained through the E.U. I don’t view it as a total success in burying ethnic and political divisions under the E.U. umbrella to fester. It appears he is more worried about violence that nationalism could bring and is willing to compromise with a broken trans-national organization. I too am concerned about the growing tide of nationalism. I however don’t view the suggestions that we cling on tighter to one of the main causes of nationalistic populist fervor as an adequate course of action.

Peter Hitchens: A Few Thoughts on the Outcome of the French Presidential Election

Interesting perspective as always from Mr. Hitchens. He certainly has the ability to bring historical precedence and past policies people have long forgotten into today’s discourse. Certainly a claim good be made that the current form of democracy is no longer working adequately and ought to be re-examined. I too feel that the complacency on the part of the masses is in part to blame for the heightened tension between government and people. Macron has a tough task which he clearly is not capable of doing. Le Pen might be knocked down but her movement will continue to grow as the discontent builds. So much uncertainty in the air. These temporary fixes will only last so long.

So as was predicted by me and countless others, Macron was victorious in defeating Le Pen and her right wing coalition. While Le Pen was not a terrible candidate her affiliation with her party and their past offensive rhetoric ultimately appears to be the cause for her unfavorability. Macron despite winning by a large margin of victory at 65% is still relatively unpopular with the populace who seem more content with a bureaucrat out of dislike for the National Front. Will this come back to bite them? I believe so and here is why.

Macron is essentially doomed from the start. In the coming weeks, Macron will be tasked with setting up his strategic alliances in a bid to gain total control over the government machinery. If unable to gain these alliances, Macron will have an extremely difficult time getting anything accomplished while president of France and will go the way of Sarkozy and Hollande. On the issue of Islamic extremism and immigration Macron must not renege on his campaign rhetoric and move in the opposite direction as his predecessors did. If he were to do so then he can expect to see Le Pen again and this time he might not be so fortunate. Double-digit unemployment, serious terrorist threats, the European migrant crisis, E.U. corruption, and ballooning public debt are the troubles that lay ahead for Macron and frankly I don’t believe his centrist platform will placate enough issues facing France. I will give him credit though for moving the French economic agenda away from failed central economic planning and moving towards a more free market capital approach.

Macron’s victory means that the E.U. will not go down without a wimper but I believe it will still go down nonetheless, just more slowly. The people across Europe appear to be wising up to the political aims of this bureaucracy whose end goals appear to be the destruction of national identity in the name of select economic gain. This is why the right has and will continue to gain traction in the political sphere so long as the E.U. continues to flounder. While Macron’s election may present a slightly more difficult negotiation with Britain over Brexit I suspect it won’t change much of the overall outcome of their leaving. Britain maintaining its own currency lends itself to be in a better strategic position. Ultimately Macron winning means the E.U. no longer has any scapegoats when problems arise, which they will.

Now to those who are now gloating that political “Trumpism” is dead with the loss of Le Pen, I feel some things need to be pointed out. While these native protectionist candidates might not appear to be doing well in the overall elections they are being effective in changing the tonality of the political discourse. Their ideas and beliefs can no long be ignored and large swaths of the population are finding their views appealing. An example of this was Austria’s president passing some legislation on religious dress aimed at curtailing niqabs and burqas. Its starting to create this interesting dichotomy where the countryside and rural areas of the countries are starting to rebel against the directions and ideas put forth by the wealthy urbanites. This does not bode well for resolving a continuously fracturing population. Not only does it pit people against each other but it increases the possibility of violent conflict and revolution. Obviously I am not condoning that course of action but it must be said for the fact  that revolutions typically come from the countryside and make their way into the city, rarely the other way around. At the celebratory speech of Macron instead of coming on stage to the sounds of La Marseillaise he came on stage to the E.U. anthem. That says it all.

A clearer picture of the future will be realized in the coming French elections in June as well as the elections in Germany in September.

The French election is coming up soon but I don’t the outcome changing all that much. That being said it does appear that Le Pen is making up some ground but still has a way to go. Macron it appears is feeling the pressure from the far right to push for more EU reforms. I personally don’t think this gesture will be enough although a “Frexit” does appear to be unlikely. The EU has long shown itself to be a bureaucratic nightmare and the end goals are to create one nation state with one European identity. I feel Macron will perform better from an economic and cultural sense but his chaining himself to the sinking ship that is the EU is troubling.

France is a Broken Country

I agree with the sentiments of this article and have found it to convey my personal opinions on the French election best. France is in dire straits and this presidential election is not going to solve the overarching problems which have plagued France for decades. Like in the US, France is divided and in search of an identity. Moreover it is stuck between two ideological opposites vying for control of the helm of the nation. The future in my estimations is bleak with increased possibilities of war and civil strife. 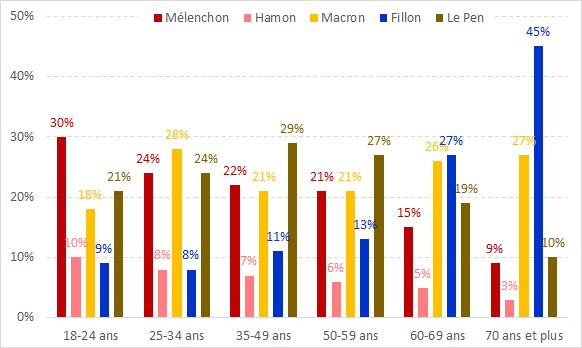 Its rather disappointing to see the faith being weaponized by politicians who clearly wouldn’t care otherwise given France’s stance on open displays of religious fervor. Personally I am not sure who I would pick of the three front runners but their personal faiths and stances on religion are likely not going to sway me. I would venture to guess that any meaningful discussion of Christianity and the Catholic faith are not going to be had. I do think the ever growing reach of Islam though is in a sense revitalizing Catholic identities even if its simply national identity and not religious practice.